Berners-Lee writes that the "Web's major goal was to be a shared information space through which people and machines could communicate."

Hypermedia was chosen as the user interface because of its simplicity and generality. Hypermedia, an extension of the term called hypertext, is a non-linear medium of information that includes graphics, audio, video, plain text, and hyperlinks. A non-linear medium is any medium that can be navigated through random access.
The rapid growth of the Internet and the consequently deployed architecture had significant limitations in its support for extensibility, shared caching, and intermediaries, which made it difficult to develop ad-hoc solutions to the growing problems.
The challenge was to introduce a new set of functionality to an architecture that was already widely deployed, and how to ensure that its introduction does not adversely impact, or even destroy, the architectural properties that have enabled the Web to succeed.
The early Web architecture was based on solid principles--separation of concerns, simplicity, and generality--but lacked an architectural description and rationale. An architectural style could define the principles behind the Web architecture such that they were visible to future architects.


REST is an architectural style for distributed hypermedia systems, as it has been developed to represent the model for how the modern Web should work.
REST provides a set of architectural constraints that, when applied as a whole, emphasizes scalability of component interactions, the generality of interfaces, independent deployment of components, and intermediary components to reduce interaction latency, enforce security, and encapsulate legacy systems.

The following constraints are applied incrementally

Results in the separation of two concerns and allow them to evolve independently.

In a client-server interaction, the communication must be stateless. The client should carry all the session state necessary for any interaction with the server and should not rely on the server storing any such context.

In order to improve network latency, responses should be labeled as cacheable or non-cacheable.

Hierarchical layers, where a component of a layer cannot see anything beyond its immediate layer.

REST allows client functionality to be extended by downloading and executing code in the form of applets or scripts. This is an optional constraint. 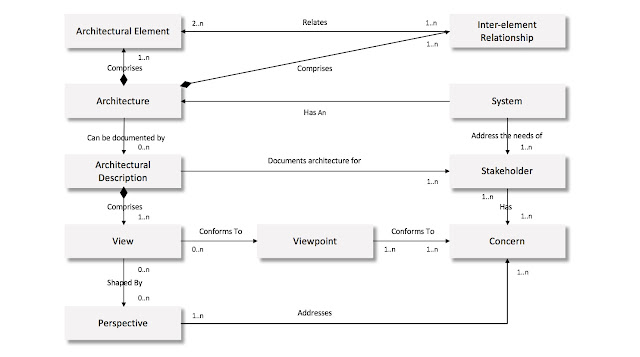 This post is an abstract of some chapters in the book 'Software Systems Architecture' by Eoin Woods and Nick Rozanski Software Architecture Definition Software elements that you need to specify and or design in order to meet a particular set of requirements, plus the hardware required to run those software elements on Key Parts of the definition Structure - System’s elements, pieces that can be constructed, and their relationships Static structure Software classes, Relational entities, Network, Hardware etc Dynamic structure System response to an external stimulus Information flow, parallel/serial execution of tasks, effects on data (create, update, delete) Properties - Fundamental properties of a system Externally visible properties Functional behavior Quality properties Scalability, Performance, Security etc Principles - of its design and evolution Fundamental beliefs, approach or intent - that guides the architecture Conventions that
Read more